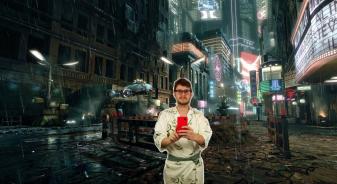 Tokyo. I’m still in Tokyo. I wake up, rub the sleep from my eyes, and roll out of bed. As I rise I take a quick look at my watch for any new emails. Nothing. There’s not much email anymore. Not since the process wars of 2016.

Many people won’t talk about the process wars. They changed the way most of the InfoTech industry works and how we are allowed to think of our jobs. In the past, I might have been responsible for running hundreds of servers. Now, the machines are in charge. I’m only allowed to feed the machines code.

We are grouped together in small teams that write code as a unit. We are “kept in line” by dogs that are trained to attack us. They say it’s for our own good. That it’s for the betterment of industry. If we try to touch the servers, if we try to do anything other than write code and feed it to the machines, the dogs will bite us.

We are kept in line by process and controls, but not like we used to be kept in check. Before, we used to have weekly meetings reviewing the work we wanted to perform. The meetings were always a joke amongst my peers. Typically they were run by a VP that had no clue what we wanted to change on the machines. If we wanted something bad enough, we could social engineer our way to what we wanted.

No more today. When we write the code to feed the machines, we have to write tests. They tell us these tests are for our own good. The tests confirm that the machines are set up exactly how they want them to be. We actually write the tests first, and they always fail the first time through. Then we write code to bring the tests into compliance.

If the tests weren’t bad enough, we also have automated tests to make sure our code conforms to “Style Guidelines”. They tell us these guidelines are to ensure conformity and consistency. I say they are there to hold us down and control us. They also require us to “lint” our code before we feed it to the machines. This once again is to ensure “conformity”.

Even with all of this verifying for conformity, we still aren’t allowed to directly feed the code directly to the machines. We must check the code into a repository where more machines take over to verify that we have successful tests and we meet the conformity guidelines. The machines also verify that our code works with code written by others, in my group and other groups.

Then, a Conformity Checker reviews my changes to make sure they are compliant with the policy. We are no longer independent; we are no longer allowed to game the review board. We feed the machines compliant code or else we end up on the streets. Three strikes and we’re out.

Which is why I’m in Tokyo. I’ve had two strikes at my company in the United States. They shipped me over to the Tokyo division for reeducation. Japan culture is heavily based on order and process. During the process wars they helped lead the revolution. Many of the compliance tools were written by or enabled by Japanese technology leaders. Yukihiro Matsumoto (codenamed Matz) was responsible for designing the programming language I now feed to the machines. Gosuke Miyashita wrote the tools that I am required to use to test my code before feeding it to the machines. And then there was Kohsuke Kawaguchi, the creator of the master machine that ensures all the code is compliant, automatically with no humans to game the process.